Winstree was a demolished station that was in use between 29th November 2017 and 21st April 2018 until it was demolished and replaced by Leighton Stepford Road in The Big Update. It was served by Connect services to Stepford Central (then known as Stepford Town).

This station is infamous for being the only demolished station on the entire network. Prior to The Big Update, it garnered a wave of sympathy, with staff even organising farewell events.

It is speculated that Winstree was removed as former SCR developer Jadey_SR requested its removal after Managing Director Charlie_RBX shared plans of continuing SCR for profit. Around the same time, another developer uncopylocked the game, which was another contributory factor, and it resulted in the release of multiple unofficial 'SCR Legacy' games.

Just before the removal, many players gathered around the station, organising farewell events to say goodbye to Winstree for good. 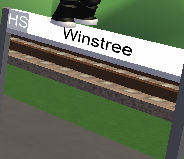 The HS (HighSpeed) signs at Winstree.

Dispatchers holding up their batons in solidarity of the loss of Winstree, as passengers watch.

The last ever trains at Winstree.
Community content is available under CC-BY-SA unless otherwise noted.
Advertisement