Stepford Express, or Express for short, is one of the four operators in Stepford County Railway. It links Stepford Central with many major urban areas, namely Benton, Leighton, Morganstown and a terminus at Llyn-by-the-Sea. On 15 May 2022, Stepford Express began serving the Newry Zone, Eden Quay and Westercoast.

Stepford Express is classified as high-speed rail, due to the fact that it skips the majority of stations along its line that are operated by Stepford Connect. It uses rolling stock that are specially designed for high-speed lines, with speeds up to a maximum of 125 miles per hour. However, due to its recent changes which involved having the line stop at the smaller stations of Westercoast, Eden Quay and Newry Harbour, this operator could now be classified as semi-high-speed on these routes.

A full journey from Stepford Central to Llyn-by-the-Sea (using R077) takes about 23 minutes, while a faster, more nonstop version can do the route (using route R078) in 22 minutes. A much more nonstop route can make the journey (using route R081) in 17 minutes. The line is coloured  pink  on network maps as of V1.7. Before that, the line was coloured  deep violet .

When the game opened, there were plans for an operator named High Speed. It was cancelled and fast services are now express. First traces of Express could be seen as far back as the 7th of January, where a new express line was built. The works included new Platforms 5A, 5B, 5C, 6A and 6B at Benton, passing tracks through Coxly and Bodin, and Platforms 1 & 2 at the Pre-V1.1 Stepford East abandoned, later removed to make way for the passing line. The platforms were shifted. Stepford Connect was rerouted via Angel Pass due to the cancellation of Metro and the old line that bypassed Angel Pass was allocated for Express. Works also happened east of Benton, where a linking line from Benton to the fast lines near Hampton Hargate was built.

On the 11th of May, BanTech unveiled the roadmap. Under Q3 of 2019, it mentioned the Express line, which got people hyped because they would be getting Express over the summer.

Express wasn't mentioned again until the 22nd of September when BanTech announced that the Stepford Connect extension to Llyn-by-the-Sea, as well as the Express line, were delayed.

On the 29th of September, Mattyx2013 showed off Faymere and commented "This station will be served by Stepford Connect but is a cool place to watch Express trains pass at speed!". On the 5th of October, Charlie showed Northshore and commented "Fancy a wander on the beach? Stepford Connect and Express can help you out with that! Introducing Northshore". This confirmed to the public that Express was skipping Faymere yet stopping at Northshore.

On the 18th of October, Mattyx2013 showed Llyn-by-the-Sea and a Class 43 for Express, which got the public hyped up again and confirmed Express was stopping at Llyn. Finally, on the 25th of November, BanTech showed a picture of the Class 43 at Stepford Central.

On the 22nd of Feburary, Faymere Green TMD was added and Westwyvern was upgraded having Express signs instead of Stepford Connect, making it the first station having Express signage. On the 18th of March, Stepford Central received its second upgrade of the year making it look very modern. On the 26th of March, an unconfirmed train was revealed, but the community quickly identified it as a Bombardier Voyager train and it was believed to be in use on Stepford Express. 2 days later, a photo of three Bombardier Voyager trains at Stepford Central was revealed. It was confirmed that two of them was a Class 221 and one of them was a Class 220 on Twitter. Both of these trains were released on the 15th of April, with 1 new route also being added.

On the 3rd of October, a sneak peak was released on the SCR Official Discord server of a small snippet of the map presumably for V1.7. At a quick glance, it looks like Express will be rebranded and going via Morganstown starting in that update and Morganstown will become the first station to serve all 4 operators in the game.

On the 10th of October, Head of Brand Design tpx_jm released a sneak peek of the new express livery of the rebranded Express logo.

On the 28th of October, Managing Director Charlie_RBX posted a sneak peek of the upgraded Class 801 in the new Express livery.

The new livery is currently available on the Class 801 and the HST, with the Class 220 and 221 being projected for possible future refurbishment.

On the 19th of February, 1.7.2 was released, which brought along an upgrade of the Class 43 to NGv3, as well as adding a buffered HST variant and the first 7-car train, the 5-car HST variant, making it the longest train in the game. Unique stop markers for these trains have been added at Benton and Westwyvern.

On the 27th of February, a sneak-peek of the updated Class 220/Class 221 was released. Later that same day, Version 1.8.3 released, containing mesh-upgrades of the Voyager, making Stepford Express the first operator in SCR to have a fully meshed fleet.

On the 12th of May, a sneak-peek showed a Voyager and a HST at a Waterline station (presumed to be Newry), leading players to believe that Stepford Express will receive an extension over the Newry branch (which is highly speculated to receive a full overhaul) in the near future. 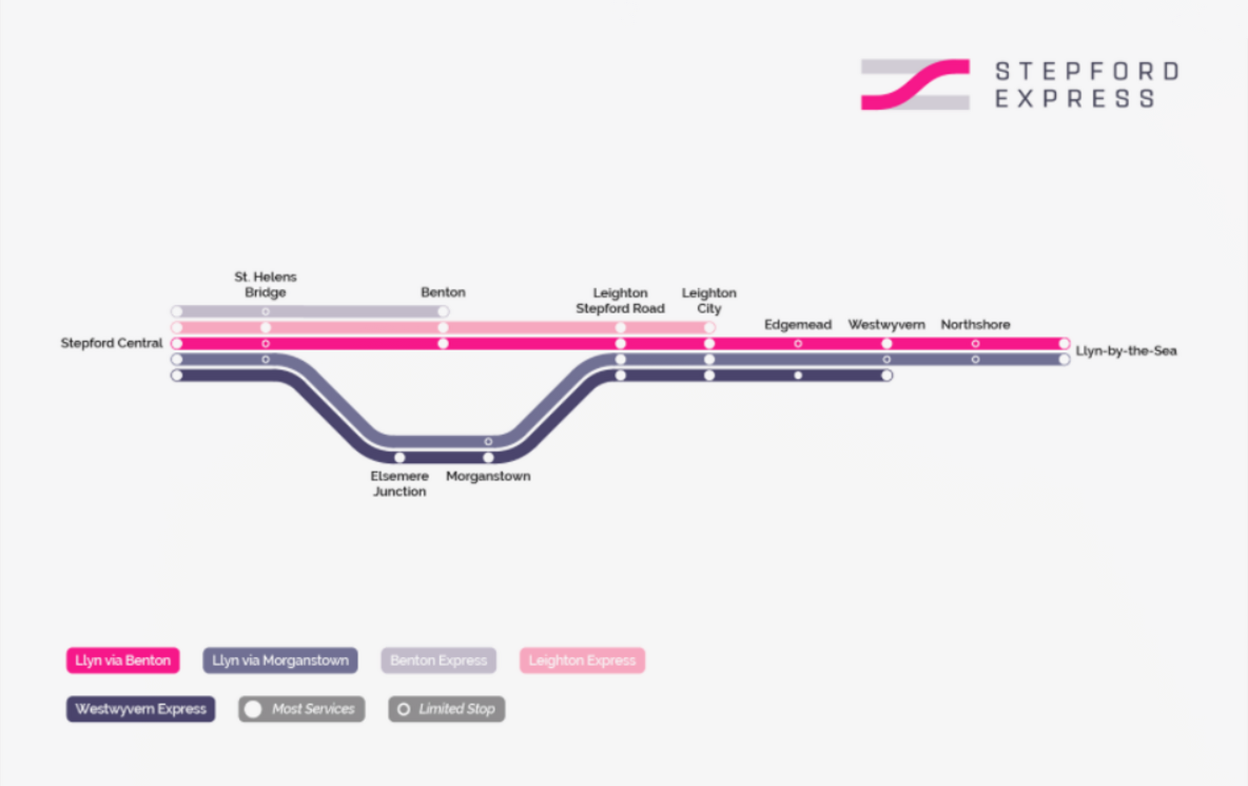 Stepford Express has been criticised by some players for being "rushed", with their evidence being that (when the operator was originally released) there were only 2 trains, and not even that, but the Class 43 was very blocky and underdetailed and the Class 801's model being copy-and-pasted over from Airlink. The livery was often criticized for not seeming to make any sense and being different on each train, with an LNER-style purple line along the side of the Class 801 while a fading angled edge was used on the Class 43, with a completely different style used on the Class 220 and 221. However, lots of the criticism diminished with the 1.7 update and its companions as the livery was refreshed to look much more modern along with the Class 801 and 43 being updated to much more detailed mesh models, as well as the run through Morganstown being opened.