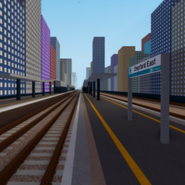 Stepford East before the V1.1 update

Stepford East as seen from the main menu

The Southgate entrance before V1.8

The platform view before V1.8

Sneak peek of SE with OHLE and curved platforms, revealed on 28/5/22.
Community content is available under CC-BY-SA unless otherwise noted.
Advertisement