The Stepford City Zone, located southwest of Bodin and Angel Pass, was a zone in Stepford County served by Stepford Connect, AirLink and Stepford Express. There were 10 stations, 1 siding and 1 depot. This zone became the busiest since the V1.1 update, as AirLink, the Stepford Victoria Extension and the Stepford Depot were implemented. In V1.2, three more stations were added to the zone: Stepford High Street, Whitefield Lido, and Stepford United Football Club. In V1.4, Express was added, which made this zone busier than V1.1. In V1.6, zones were removed with the new map style.

Note: All information below is pre-V1.6, before zones are removed.

The Stepford City Zone as seen from a bird's eye view 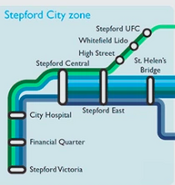