MTD
Morganstown Docks is a through station served by Waterline services to Newry, Benton, Greenslade and Morganstown. It has 4 platforms. 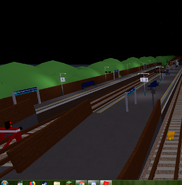 Morganstown Docks during the day (pre-V1.4.4)

View of the docks. The far left on the picture is Benton Bridge while the far right is Morganstown.

View of the docks. Far behind is Port Benton and Benton Bridge.
Add a photo to this gallery
Retrieved from "https://scr.fandom.com/wiki/Morganstown_Docks?oldid=60779"
Community content is available under CC-BY-SA unless otherwise noted.