Llyn-by-the-Sea, or simply known as Llyn, is a terminus interchange between Stepford Connect and Stepford Express. It is the southern terminus of both lines. This station is managed by Transport For Stepford.

The tunnels leading to the station prior to V1.7.2

A Class 43 departing from the original (pre-V1.7.2) station, passing alongside an arriving Connect Class 68.

Sneak Peek of the station's 1.7.2 refurbishment, released on 21/01/2021. A Stepford Express Class 801 is sitting at platform four with a Stepford Connect Class 377 and Class 465 visible in the background.

Main entrance (V1.7.2) with Stepford Express Headquarters across the road. 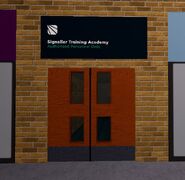 Entrance to the Signaller Training Academy
Community content is available under CC-BY-SA unless otherwise noted.
Advertisement