The station is designed to be used for through services, which finally was extended in V1.1, when the station was used for services to and from Edgemead.

Despite being called "Leighton City", it is not at all connected to Leighton Stepford Road nor Rocket Parade via road, and the only thing that would make you think is that it is actually in a city is that the platforms are underground. 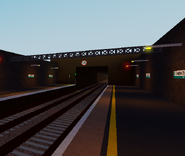 A Class 465 At Leighton City
Add a photo to this gallery
Retrieved from "https://scr.fandom.com/wiki/Leighton_City?oldid=65807"
Community content is available under CC-BY-SA unless otherwise noted.