The British Rail Class 802 A-Train AT300 is a type of electro-diesel multiple-unit train built by Hitachi, as part of their A-Train family. The trains are currently in use with Airlink. The train have received a NGv3 rebuild in Blender by PDV OverheadWires and is the first train to receive it. It has low tris and runs much smoother in game.

A Class 802 with the 2020 new AirLink livery at Stepford Airport Parkway.

The Class 801 and Class 802 at Leighton Stepford Road. 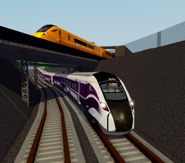 The Class 802s at Stepford Central.

Legacy Class 802 with the old livery.

Legacy Class 802 with the transition livery.

Legacy Class 802 appearing on the billboard as an advertisement of Airlink.

A Class 802 boarding at SC
Add a photo to this gallery
Retrieved from "https://scr.fandom.com/wiki/Class_802?oldid=63862"
Community content is available under CC-BY-SA unless otherwise noted.