The British Rail Class 720 Aventra is an electric multiple-unit manufactured by Bombardier, in use on Stepford Connect. These trains are formed of 5 coaches, and cost 1500 points.

A Class 720 at Northshore, bound for Stepford Central 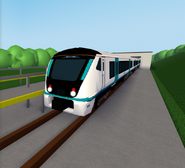 Legacy Class 720 appearing in the billboard.

A sneak peek of the NGv2 Class 720 in Stepford Connect livery.

The Class 720s at Stepford Central.
Community content is available under CC-BY-SA unless otherwise noted.
Advertisement