Removed from Service on the 31st December 2018

The Class 701 Aventra was used for Waterline services before it was removed. These trains were 4 cars in length and had a maximum speed of 100 MPH. It costed 3000 points and has been retired, which means it cannot be purchased nor spawned anymore. It was originally thought that the train was under refurbishment, but it has been over a year since they were pulled from service and Next Generation trains have been built since then.

A Class 701 stopping at Newry 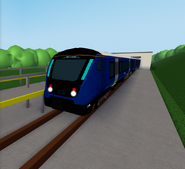 Class 701 in the driver spawn menu

A Class 701 arriving at Whitney Green

A Class 701 terminating at Newry Harbour