The British Rail Class 508 is a type of electric multiple-unit train built by BREL, as part of their PEP family. These trains are currently in use on Waterline and cost 2,000 points. 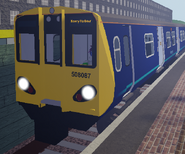 A sneak peek of the Class 508 in 2019.
Community content is available under CC-BY-SA unless otherwise noted.
Advertisement