Stepford County Railway Wiki
Register
Don't have an account?
Sign In
Advertisement
in: Stepford Express Trains, Added in 1.4, Refurbished in 1.7.2,
and 3 more

The Class 43 (HST), also known as the InterCity 125, is a diesel-electric locomotive manufactured by BREL, in use on Stepford Express. Two of these locomotives (also referred to as powercars) top-and-tailing four Mark 3 coaches can be purchased for 3,000 points, while the variant with 5 Mark 3s and the variant with powercars with buffers each cost an addition 800 points. When this train first came out, it was priced at only 2,400 points until 26 December 2019.

This train has been remodeled in Version 1.7.2 and currently has 3 variants: Standard, 5-car (the first 7 car Stepford Express train), and Buffer. 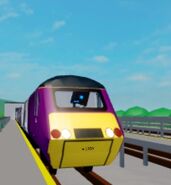 A sneak peek posted by Head of Brand Design tpx_jm.

Class 43 at Newry
Community content is available under CC-BY-SA unless otherwise noted.
Advertisement