The British Rail Class 387 Electrostar is a type of dual-voltage electric multiple-unit train built by Bombardier, in use on AirLink, and formerly on Stepford Connect and Waterline. These trains are formed of 4 coaches and cost 3,000 points. 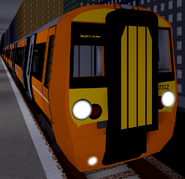 Class 387 along with other trains from the Electrostar family. 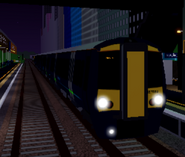 Legacy Class 387 during its last moments on the Waterline.

The sneak peek of the remodelled Class 377 and Class 387