The British Rail Class 360 is a type of electric multiple-unit train built by Siemens, as part of their Desiro family. The trains are currently in use with AirLink.

A legacy Class 360 and Class 357 at Stepford Airport Parkway 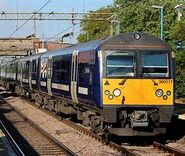