The British Rail Class 357 Electrostar is an electric multiple-unit manufactured by Adtranz who merged to become Bombardier, currently in use on Stepford Connect. These trains are formed of four coaches and do not cost any points as it is the starter train for all players.

A Class 357 on its old livery approaching at Stepford Central. 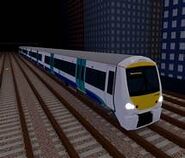 A Class 357 approaching at Financial Quarter, bound for Stepford Victoria.

The latest sneak peek of the NGv3 version of this train.

A Class 357 on the way to Stepford Central.
Community content is available under CC-BY-SA unless otherwise noted.
Advertisement