The Class 350 Desiro is an electric multiple-unit manufactured by Siemens, in use on Stepford Connect. These trains are formed of 4 coaches and cost 1500 points.

The old Connect Livery Class 350 at Starryloch, bound for Llyn-by-the-Sea. 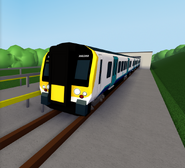 Two legacy Class 350 stopping at Coxly, shot on April 5, 2018 prior to the Big Update. This is also the earliest image on the wiki.

A Class 350 at Coxly, bound for Leighton Stepford Road.
Add a photo to this gallery
Retrieved from "https://scr.fandom.com/wiki/Class_350?oldid=63549"
Community content is available under CC-BY-SA unless otherwise noted.