The British Rail Class 332 is a type of electric multiple-unit train built by CAF and Siemens. The trains are currently in use on Airlink. 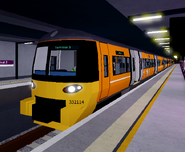 The Class 332s at Airport Central. 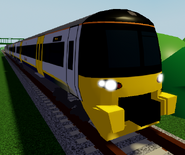 A Class 332 at Leighton Stepford Road from Airport Terminal 3.
Add a photo to this gallery
Retrieved from "https://scr.fandom.com/wiki/Class_332?oldid=57833"
Community content is available under CC-BY-SA unless otherwise noted.