The Class 171 Turbostar is a diesel multiple-unit train manufactured by Bombardier, in service on Waterline. These trains are formed of 2 coaches and cost 2250 points. 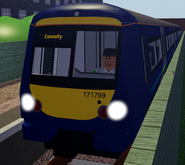 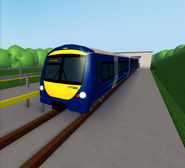 Mesh rebuild of the train, revealed on the 4th July 2021.

NGv3 Class 171 on the Morganstown Shuttle at Morganstown.
Community content is available under CC-BY-SA unless otherwise noted.
Advertisement