The Class 170 Turbostar is a diesel multiple-unit manufactured by Adtranz and Bombardier, in use on Stepford Connect. This train is formed of 3 coaches and cost 1500 points.

A Class 170 at Whitefield bound for Stepford Victoria. 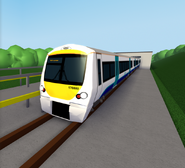 A Legacy Class 170 going to Bodin.

A driver doing a glitchy Class 68 route from Edgemead to Stepford Victoria.

Next Generation Class 170 with rebranded Connect livery on R005 to Stepford Airport Central at Benton Bridge.

Class 170's interior.
Add a photo to this gallery
Retrieved from "https://scr.fandom.com/wiki/Class_170?oldid=63544"
Community content is available under CC-BY-SA unless otherwise noted.