On 14 May 2019, this train was added to game. More than one year later, on 19 June 2020, the second sneak peek of the refurbished Coxly station showed the Class 158 with the new rebranded Stepford Connect livery. On 27 February 2022, the horn for this train was changed. 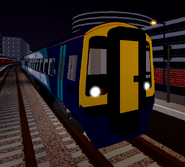 A Class 158 in "the Future of Stepford County Railway" video at Woodhead Lane.

An old Class 158 between a Class 377 and a Class 185.
Community content is available under CC-BY-SA unless otherwise noted.
Advertisement